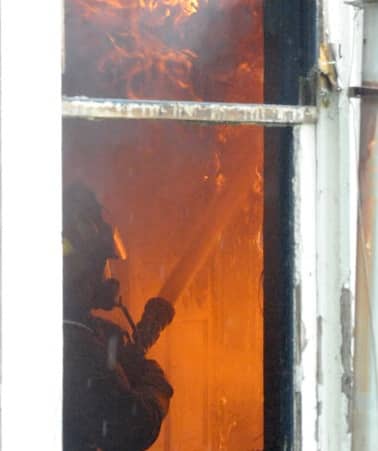 JACKSON TWP. — Smoke from a fire on Oak Ridge Road yesterday could be seen from Kelley Hill to State Road 252.

Brown County dispatch received a call just after 2 p.m. reporting the fire in the 7400 block of Oak Ridge. It came from a woman inside a home, who believed the house was on fire.

When firefighters and police arrived, they found that storage buildings on the property were on fire and not the home.

The storage buildings, including all of the items inside them, and an SUV were destroyed in the blaze that kept firefighters on scene until 6:30 p.m.

Oak Ridge Road also was closed for a time while crews worked the fire.

Jackson Township Volunteer Fire Department Assistant Chief September McCabe said the cause of the fire is undetermined and remains under investigation.

Firefighters also had to fight a fire that started in the nearby woods.

McCabe said the home was not damaged and no one was displaced.

POET’S CORNER: “Nirvana,” “For the Children”