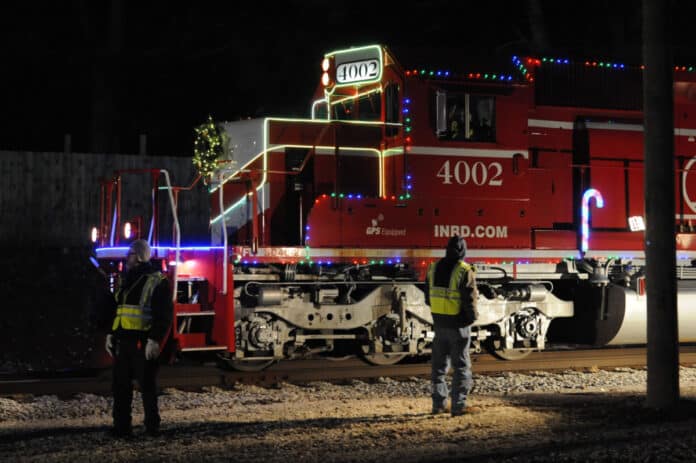 A rollerblader in fishnets. A guy walking a goat. A leather-collared clown riding a tricycle, red dreadlocks waving in the wind.

Downtown Nashville was much more alive and colorful than a normal Sunday morning, as one of Brown County’s best-known musicians used it for his video backdrop.

The shoot for the Rev. Peyton’s Big Damn Band shut down three blocks of Jefferson Street for about four hours on July 15, though anyone who wanted to walk along it was welcome. The idea was to create a parade-like atmosphere, said local musician John Bowyer, who was manning the street barricades at the Franklin Street corner.

The 60 or more people who showed up to the shoot were “friends and fans” of the band who answered a call on Facebook for extras, said Jayme Hood, a local musician herself and the safety coordinator for this shoot.

The band also shot footage the night before at her house and at a country church in northern Brown County, and they were heading to Bloomington later in the day as well, where they’d also shut down some streets, she said. That’s where it could get tricky, she predicted; it was good to start the day in Nashville to work the kinks out.

This was the first music video shoot to take place in Nashville in recent memory, said Town Manager Scott Rudd.

“Rev,” who lives in Brown County with wife and bandmate Breezy, petitioned the town council to use a Nashville street as the backdrop for “Poor Until Payday.” That meant blocking all the parking spots along that stretch of road since before dawn, barricading all the cross streets, and potentially disrupting the early service at Nashville United Methodist, but a couple church members said they couldn’t hear much of what was going on in the street from inside. A few of them trickled out onto the porch, quietly staring and smiling.

The Nashville Town Council voted unanimously to support the project, seeing the potential for free advertising for the town. The band paid $35 for a right-of-way permit, and gave the town an autographed, homemade sign as thanks. It read: “I helped the Rev. Peyton’s Big Damn Band make a music video and all I got was this lousy poster.”

Standing at the Village Green surveying the action with his family, resident Ken Birkemeier said maybe the town should think of doing more of these.

Video extra Andy Ford agreed. “This is the most fun all of Nashville has ever had,” he said, peeling off his gorilla mask.

He especially loved the fact that Rev was focusing in on his hometown for this piece and that the town was supporting it. “You talk about bringing in people and bringing in money, what could be any better?”

Dressed as a banana, Ford’s wife, Laqueta, nodded in her peel, as kids on scooters and other characters streamed around her in the street. “This is what makes Brown County, Brown County,” she said.