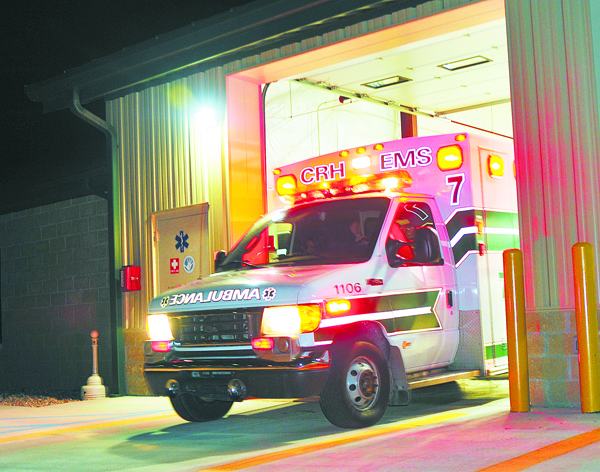 Starting at the end of April, residents will notice a different provider coming to their aid if they call for an ambulance. But most of the faces on the truck will be the same.

Brown County has been served by ambulances from Columbus Regional Health since 1994. The current agreement will be in place until April 29, which is when the new agreement with IU begins.

Commissioner Diana Biddle reported that at least 11 EMTs and paramedics from CRH have transferred to IU Health Lifeline in order to continue to work in Brown County.

“We have at least four that have been here for 20 years,” Biddle said. “We were very excited and very surprised with the number that made the transition. I have a feeling there might be a few more.”

Some IU Health Lifeline staff from outside the county will help fill in shifts while training happens in the beginning of the transition.

“I am so glad to hear basically the same employees are staying on. If somebody comes in from another county and doesn’t know Brown County’s roads, it could take a while to get that figured out,” commissioners President Jerry Pittman said.

This contract will run from April 29, 2021, to Dec. 31, 2023. After the initial term, the agreement will automatically renew for one-year periods. Either the county or IU Health Lifeline may give written notice of termination with six months’ notice.

Both ambulances will not leave the county unless it’s to transport patients from an incident scene to the appropriate hospital, the agreement states.

“You will remember, some of our ambulances were being called out of service to do nursing home transports in Columbus, so these ambulances will be 100 percent dedicated to the county,” Biddle said.

“They will have 100-percent county staffing, so the staffing will not rotate. People who are here will be staying here.”

Under the agreement, IU Health Lifeline will pay the operating expenses for the ambulance service and will be entitled to receive the operating income.

The county will continue to provide the ambulance base. The base will remain the sole property of the county, which will cover costs like utilities, insurance and maintenance.

The contract with CRH was set to expire at the end of last year, but was extended as the commissioners worked to find a new provider.

For years, the hospital had provided two ambulances in Brown County on contract. Late last year, it was revealed that CRH wanted to provide only one ambulance here. CRH did not submit a bid last year when the commissioners opened proposals for the next three years of service.

The county had a net-zero contract with CRH, which meant CRH billed the county for any ambulance costs not covered by health insurance. For 2019, the county paid more than $600,000. The commissioners budgeted $515,000 for 2020 to pay the contract for 2019. Making up that difference required the county to find more money.

“That is a fixed number. We don’t have to guess on what it might be. We can plug that number in and then we don’t have to come up with any more money,” she said.

Pittman said this agreement with IU Health Lifeline worked out better than he imagined.

“That is just a much better arrangement than we had with Columbus,” he said.

PET TAILS: Ear cropping — where do you stand in controversial decision?