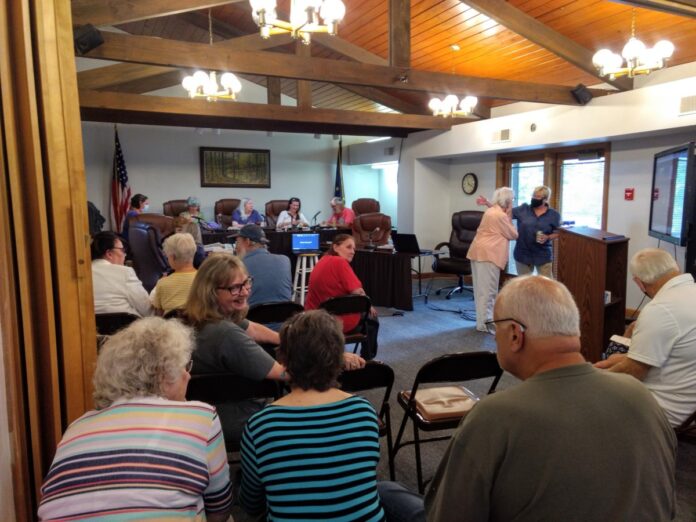 At least 60 people filled chairs, lined the walls and spilled out into the hallway at the Nashville Town Council’s first budget work session Tuesday evening to talk about a proposal they believed was before the council: Defunding or cutting the budget of the town police department.

No such proposal has been discussed in any public council meeting this year.

Yet, an online petition against defunding or cutting the Nashville police had gathered close to 500 signatures in less than a week, and yard signs had begun to pop up north of town urging passers-by to “Save Nashville PD.”

When asked how all of this had started, Chief of Police Ben Seastrom said that he’d received a phone calls from two council members asking questions about the department’s manpower and funding. He said one of them asked if he could get by with four officers. There are currently six full-time officers; one of them is out temporarily with COVID-19.

Similar discussions also took place during budget workshops in the fall of 2019. Council members challenged Seastrom to cut his budget by 20 to 30 percent. He came up with ways to cut 10 percent, but after hearing from a room full of supporters, the council decided to fund $1,000 raises for each of the NMPD’s five officers instead and issued him an apology.

Town council Vice President Nancy Crocker said that the discussions swirling around social media recently had been blown out of proportion.

“It was based on hearsay, and nobody that I know of on the town council has talked about getting rid of the police department,” she said.

Council members have been asking questions about the budget, how money is being used and what they get for that money, and will continue to do so. The town also needs to make sure it has enough money to provide other important services, like water, sewer and good roads, she said, or it won’t have residents.

“And there have been talks in the past and ideas thrown out there about the sheriff’s department taking over and all of that, but none of that was ever, like, talked about at this point. It was a discussion about our budget and what our budget is being spent on.”

Resident Jessica George told the packed meeting room on Aug. 10 that she’d encouraged people to attend because she’d received information on good authority that cuts were being discussed again this year. She also posted several times last week on Facebook about it and started an online petition titled “Say no to budget cuts or the complete closing of The Nashville Police Department.”

At the meeting, George said she was “sorry, not sorry” that so many people showed up to learn about the budget and that the council should be glad to see this many people interested in what they’re doing. Council members said they were.

The meeting on Aug. 10 was the first in a series to examine the budget as the council does every fall. Two more meetings are scheduled for Wednesday and Thursday, Aug. 25 and 26 at 6:30 p.m. at Town Hall.

The town’s 2021 budget is not due to the state until November.

How much do they get?

Council members asked town Clerk-Treasurer Brenda Young about the money they will have coming in for 2022 and how it can legally be spent. Two members, Crocker and Anna Hofstetter, have only been through the budget process twice before, and one, Tyra Miller, is doing it for the first time.

Young told the room that town government is funded mostly by taxes. The budgets the council is looking at now are used for the general operation of the town, not for the wastewater and water utilities which are funded by user fees.

The town council is unable to just charge a new tax or a higher tax rate if it wants to, because budgets and taxation are held to certain levels by the state. So, in order to increase funding for something like the police department, the town would have to find money to take from somewhere else, or it would have to have new tax money coming in from an annexation or new development that doesn’t exist now. Also, some sources of revenue can only be used for certain purposes by law, such as for restrooms or road paving, so they could not legally be used for police.

Six people spoke in favor of maintaining or increasing police funding but did not give ideas for how to do it except for cutting back on landscaping.

A man who identified himself as a “concerned business owner” but did not give his name asked what the budget was for the police department and why two or three officers were working for free. Seastrom explained that those are volunteer reserve officers and that the town can only pay to support so many paid officers.

The department has been struggling for years with high turnover as officers leave for higher-paying jobs with other police forces. Currently, all six paid officer slots are filled, including Seastrom as chief. He is running for county sheriff in 2022, though, and if he won, he could not hold both jobs.

The NMPD also has four part-time slots with two of them currently unfilled, plus three reserve officers who volunteer as is common for other police departments.

“Do you realize 80 percent of the budget goes to the police department?” Crocker added. The man who was asking questions at the meeting said that he thought it was probably worth 84 percent.

In addition, the police have a separate fund called the VOCA grant which pays for its crisis intervention advocate. It was budgeted at $52,153 for 2021.

The police also have the full use of the town’s local option income tax (LOIT) for public safety which is separate from the general fund, totaling $68,240. That was going to pay for uniforms, vehicle insurance, supplies and utilities at the police station, and communication equipment for 2021.

There are other sources of revenue coming into the town that are spent on other town operations and can’t necessarily be spent on whatever the council wishes to use it for, like the food and beverage tax and road funding money.

The first man who spoke asked to see the budget for 2022 and specifically how much was being spent on police.

Crocker told the crowd that “zero decisions have been made about this budget.”

She pledged to talk to anyone who had questions and said that only three people had reached out to ask if rumors they’d heard were true.

County resident Andy Voils said he came to the meeting because he’d heard there was an opportunity to reduce funding for the police department, and judging from the amount of people in the room, he wasn’t the only one who was passionate about the police force. Because they carry guns and face risks daily, “if anyone, that’s the highest paid person I want in my community. I want to make sure we’ve got the best person,” he said, as the audience clapped loudly over his words.

“These police officers here are very good police officers,” said Mick Reddick, a retired Marion County officer who now volunteers with Nashville. “Don’t let them slide out of your fingers.”

Hofstetter said she agrees that the town officers are “very much underpaid,” but to change that, the council would need to “be investing even more of our already tight budget.”

Patty Terrell, who works “the graveyard shift” at Speedway, said the town police officers make her feel safe. “I’ve had some people come in that scare the pants off me and they do an awesome job,” she said. Without the Nashville police, she worries that county officers wouldn’t be able to get to town quickly if they were elsewhere when a Nashville call came in.

Seastrom said the same after the meeting. It’s already difficult to cover now when he has officers gone for weeks at a time for academy training, or when someone is sick or on vacation. “It was pretty concerning on the information I was getting that we were going to be down to four or less,” he said.

He was glad to see that so many people decided to show up.

“I thought things were resolved with the 2019 meeting. … The majority of the council that’s here now really supports us and sees what the public sees, that we’re not just a guy in a uniform taking up space,” he added.

“… We don’t want people to be without. And if you reduce our numbers down to absolutely nothing, how do we even take care of ourselves? We have to have officer safety on calls, too.”

According to FBI estimates from 2019, the most recent available, Midwest towns of 10,000 people or fewer employ an average of about 3.5 law enforcement employees, including civilian employees, per 1,000 residents.

The size of the Nashville police force has fluctuated over the past 15 years according to the town’s salary ordinances, but no fewer than six full-time officers have been budgeted since before 2006. That does not mean that all the spots were filled, though.

In 2015, the department gained two full-time office workers who were not police officers so that residents could find someone at the station when the officers were out patrolling.

By 2019, the department had six full-time officers including the chief, plus four part-time officer slots, a grant-funded crisis intervention advocate working at the station, and the volunteer reserves. Those were all allowed for in the 2021 salary ordinance as well.