STORY — Rich Hofstetter is rooted in the grounds of Story Inn as deeply as the trees on the 17-acre property.

He grew up here. His father, Richard, purchased the town on Valentine’s Day of 1999 at a sheriff’s sale.

After Richard passed away in 2019, Rich took over his father’s shares. The co-owners, Jacob and Kate Ebel, left the business in October of 2021.

His major, and primary, goal as the owner is to purely build a sustainable business model.

“I remember when I was a kid, employees would say they would get hungry down here (without work),” he said, as there were no set operating hours for the business.

“That stuck with me.”

Going forward, he does not want to lay any of his 27 employees off simply because of a change in weather and demand.

“I can’t build a team when it’s seasonal,” he said. “If I lay people off, they’ll go find other jobs.”

Current staff members have been there for 10 years or more.

He is not trying to reinvent anything. He is just making sure that all of the avenues of Story Inn are running as cohesively as one entity.

The business specializes in dining, events and lodging in the southern part of the county.

Hofstetter studied economics and has experience from other places, like the city of Seattle, in business accounting and software development.

With impending labor shortages and restaurants typically not making money on winter weekdays, Hofstetter chose to not be open Monday, Tuesday or Wednesday through the winter.

“We purposefully reduced hours of operation to build a sustainable business model,” he said.

The dinner menu is a set menu, established by the chef. Rich said that a set menu “gives creative freedom for the chef to create the best food and reduces food waste if you only have five items on a menu.”

In addition to a wedding barn and lodging, there are three gardens on the property where food is grown to use in the restaurant.

Baking is also an ongoing project. Breads, muffins, pastries and more are being prepared by the sous chef.

“In the past we had baked for guests in the dining room, but haven’t really been able to consistently provide different options for carryout,” Hofstetter said. “That’s one project our sous chef has been working on.”

“We create different special events for people to come out here,” he said. “It’s an experience out here. People have to spend at least 30 minutes getting here — this is the destination. This is the experience. They don’t forget their experience here.”

Live music is one of those weekly offerings, with a professional pianist playing in the dining room. One of the servers also plays violin and the beverage director is a classically trained singer.

Once they stop serving and start performing, Hofstetter said visitors often stop and ask themselves in amusement, “What is this place?”

Story was founded as a town in 1851 by its namesake, Dr. George Story. 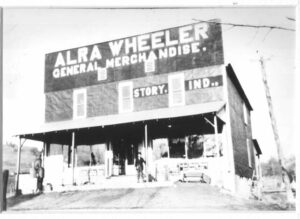 Dr. Story was a medical doctor who came from a long line of timber harvesters in Ohio.

When President Millard Fillmore gave a land patent to Dr. Story located in Van Buren Township, he got to work building structures that remain to this day.

The town soon became the largest settlement in the area and in the height of its popularity from 1880 to 1929 the village supported two general stores, a nondenominational church, a one-room schoolhouse, a grain mill, a sawmill, a slaughterhouse, a blacksmith’s forge and a post office.

Then came the Great Depression in 1929, causing families to abandon farms and search for work elsewhere. The town never recovered and Brown County lost half its population between 1930 and 1940, according to Story Inn’s website.

“This exodus of people created an opportunity for the State of Indiana to begin the purchase of 16,000 acres of wooded hills that are now the Brown County State Park, the largest in the state,” the site says. “As years passed, thousands of additional acres were acquired to form the Hoosier National Forest, Yellowwood State Forest and the Lake Monroe impoundment lands. These vast tracts of public lands now surround Story on three sides.”

Hofstetter does not wish to change facets of the business, but to improve what’s already there to build something sustainable and preserve the uniqueness of the town.

Two projects on deck are repairing a scale shed that’s leaning and restoring a blue house next to the inn to be an overnight accommodation.

“It is important to me (to preserve) because it’s a historic building,” he said. “I’m making that a priority, it’s kind of fun for me. Sometimes they’re not revenue-producing, but preserving historical structures.”

Looking farther into the future, potentially there might be a general store included in the business down the line. Neighbors will already stop and offer to pay for vegetables, milk, propane and even batteries from the inn. All in due time, Hofstetter said.

Events on the grounds aren’t limited to weddings, baby showers or birthdays.

Hofstetter has coordinated with nonprofits, charities and other organizations over the years as an event venue.

The largest fundraiser for the Brown County Humane Society’s new shelter was a concert hosted at the inn.

Groups like Cummins, Toyota and Centra Credit Union have stayed on weekdays for various gatherings.

Aaron Harden and his wife have been faithful regulars to Story’s Tavern for a number of years, and even became friends with the former owners. Three and a half years ago, Harden started bringing comedy shows to the destination.

Harden is a comedy fan, visiting comedy clubs in Bloomington and Indianapolis. Being a Brown County local, Harden said he didn’t want to have to drive to be entertained.

“A lot of the time there’s nothing to do when it gets dark,” he said. Activities like bowling or putt-putt are scarce, if non-existent in the county, so Harden wanted to help liven up the after-dark scene.

He said that Indiana’s comedy scene is amazing, offering a variety of acts to book at the inn. Since word has been out about Story’s hospitality, they are now getting calls from comedians who want to perform there.

They’ve had quite a few sell-out shows with national acts, whether they’re “dry bar” (family-friendly) or intended for more mature audiences.

Harden said people often take the slogan — “One Inconvenient Location since 1851” — to heart, but it’s truly not too far out of the way.

It’s also a great addition for overnight guests at the inn, giving an option for entertainment if they’re “in for the night,” Harden said.

“Keep your eyes on the schedule,” he said of upcoming shows.

Hofstetter said partnering with Harden has allowed him to continue to focus on providing the best venue possible for guests.

“Each time we host the show it’s a priority for me to ask both guests and comedians how we might make things better,” he said. “It’s an iterative process each time we learn something. We’ve gotten to a point where some comedy aficionados who attend claim Story to be one of the best venues in the state.”

“I see an opportunity for up-and-coming comedians to use our destination venue as a platform to establish themselves for future gigs. Likewise, since we have limited availability for our shows, we can simultaneously attract the very best talent around.”