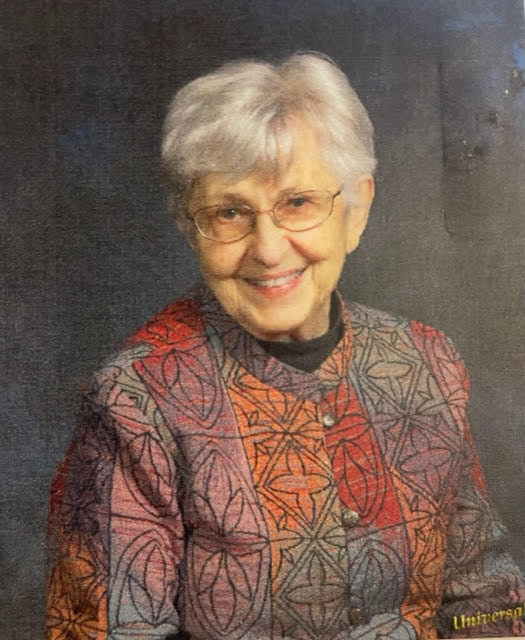 Remembering Barbara Frances Josephine Beck Nolin, daughter of Marion Marguerite Curtis Beck, daughter of Josephine Sonnenburg Curtis, daughter of Mary von Gunten Sonnenburg, who immigrated from Switzerland to Toledo, Ohio. Barbara breathed her last and died at a good old age, an old woman full of years, and was gathered to her people. This is the length of Barbara’s life, ninety-seven years. (Barbara’s words exactly!)
Barbara died peacefully in her home of natural causes on April 30, 2022 in Bloomington, Indiana. She was visited and comforted by close family and friends. She was born in Findlay, Ohio on Jan. 9, 1925 to Marguerite and Clyde Beck. After attending school in Findlay, she earned a bachelor’s degree in Vocal Music from Wheaton College, and went on to earn a Masters of Religious Education from the Biblical Seminary in New York City, later known as Union Theological Seminary.
On Sept. 3, 1949 Barbara was ordained by the Evangelical United Brethren Church, which later joined the United Methodist Church. A trailblazer, Barbara was the first woman to be ordained by that denomination and served as the Director of Religious Education at St. Mark’s United Methodist Church in Findlay.
Barbara recognized the importance of early childhood education and devoted ten years to full time parenting after the birth of her first child in 1955. She then returned to study at Saint Mary’s College to earn her teaching certificate in Music Education. She became a public-school music teacher in Indiana, instructing students of all ages. After moving to Terre Haute in 1973, while teaching full time Barbara earned a Master’s of Education Degree at Indiana State University and joined the staff of Terre Haute First Baptist Church as the Minister of Music and Choir Director. She retired from teaching after 27 years and reclaimed ministry, pastoring several United Methodist churches in Ohio for 10 years. Later she became a staff member on the pastoral care team at First United Methodist Church in Bloomington, Indiana.
During the last 15 years of her career, Barbara moved to Clarkston, Michigan. A favored substitute teacher, she was known as the “Rappin’ Granny” who wrote and performed raps warning against drug and alcohol abuse, and teaching the importance of kindness and inclusion. No matter where she lived, she loved being close to her grandchildren. At the age of 85 she retired and returned to Bloomington, Indiana. An active participant at First United Methodist Church, she continued pursuing biblical research and published a book on genealogies from the Old Testament called Hebrew Family Trees – The Favorite Son of the Favorite Wife.
Barbara was preceded in death by her parents and her brother, Robert Beck. She is survived by daughters, Elizabeth von Gunten and Nancy Nolin; by her sons, Mark Nolin and Timothy Nolin (Robin Nolin); by grandchildren Nathan Nolin (Beth Nolin), Caleb Nolin (Liz Nolin), and Joshua Nolin, Hope von Gunten, Ben Rogers (Adam Bloemstein), and Rebecca Rogers; and great grandchildren Riley, Emma and Maggie Nolin.
Barbara generously donated her body to the Anatomical Education Program at Indiana University School of Medicine. A memorial service will be held at a later date. Donations in Barbara’s name may be sent to:
* St. Mark’s United Methodist Church, 800 South Main Street, Findlay, Ohio 45840
Donations will be used to support the music ministry program.
* The Presser Foundation, 385 Lancaster Avenue #205, Haverford, Pennsylvania 19041
The Presser Foundation is dedicated to music education and music philanthropy.